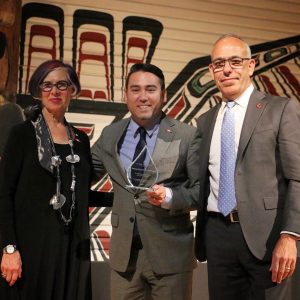 I’m extremely excited to have received the Schilly Award from the Canadian Blood Services at their Honouring Our Lifeblood Awards Ceremony for the work we’ve done with Mixed Match. It’s a huge honour and it means a lot to be acknowledged by the Canadian national stem cell registry in this way.

For the award, Canadian Blood Services brought me out to Ottawa to attend their Honouring Our Lifeblood Awards Ceremony and hosted a screening of Mixed Match at the Canadian Blood Services headquarters for their staff and citizens of Ottawa. It was a great experience to meet the other recipients and be among so many amazing Canadians doing life saving work!

History of the Schilly Award: In 2007, Canadian Blood Services was approached by an organization called HipHopCanada. One of the members of their online community, Nick (Schilly) Schilbach, a ‘b-boy’ from Abbotsford, BC, had passed away after battling leukemia.

Nick had gone through extensive bouts of chemotherapy and radiation treatment, followed by a bone marrow transplant. Despite the odds against finding a compatible donor within a patient’s family, Nick was able to find a match in his youngest brother.

Aware that many patients like him are not as fortunate, Schilly undertook the task of spreading the message of need. HipHopCanada was a perfect vehicle for this, and soon, a partnership was formed with Canadian Blood Services’ OneMatch Stem Cell and Marrow Network. Together, HipHopCanada and OneMatch launched the first-ever National Stem Cell and Marrow Awareness Week in Canada. The hope was to inspire young, ethnically diverse Canadians to join the program.

To be nominated for the Canadian Blood Services Schilly Award, an individual, group or organization must have contributed significantly to recruitment or awareness of the need for blood, stem cells or organs and tissues. Their reputation should be aligned with that of Canadian Blood Services—inspiring Canadians to join our movement.