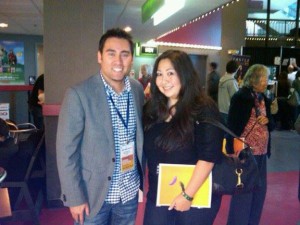 For the last six years, I’ve been working on Mixed Match. It’s definitely been a marathon. The idea for the film was presented to me back in the summer of 2010 by Mixed Marrow founder, Athena Asklipiadis. Her and I met up at the San Diego Asian Film Festival where I was screening my first feature documentary, One Big Hapa Family. We talked about the work she does raising awareness to find bone marrow donors for mixed-race patients and how difficult it can be for many of these patients. I actually found the work she does so inspiring that she made me cry. So of course I knew this would be the topic of my next documentary.

From there it’s been a six-year journey to finish this film. We’ve logged many miles across North America filming with various patients and capturing their stories. We’ve also interviewed some of the top scientists and doctors in the field of stem cell transplantation. It’s definitely been an amazing experience and now I truly feel like an expert on this topic.

So here I am, after almost an entire year spent sifting through the 200 hours of footage I’ve finally locked the edit for the feature length version of Mixed Match. I’m really happy with how the film came together and the stories were able to tell. I’m also excited to have a platform to share the stories that couldn’t make it in the film on the Mixed Match Project website. This month we move into postproduction on the sound and picture for Mixed Match. There’s light at the end of the tunnel!

It’s definitely an exciting time and we look foreword to screening the film in the next few months to audiences across North America!